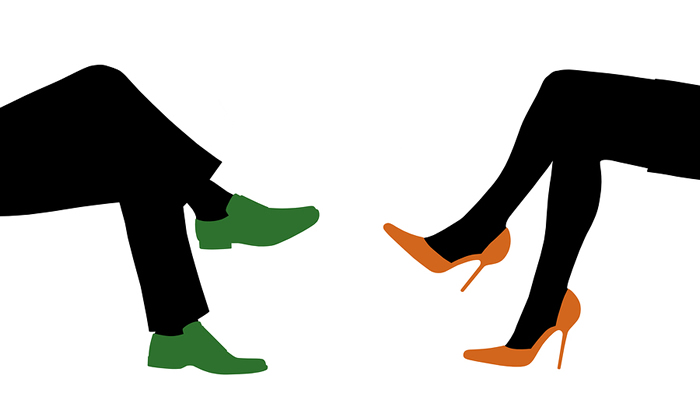 In the 1950’s in the UK when my parents married, for a while they both worked for the same company – ICI.  My Mum had left school with the equivalent of several GCSEs and she worked as a payroll clerk.  (She was considered by some to be a little ‘racy’ because she carried on working after her marriage but that’s another story!)  My Dad had left school at 14 with no qualifications and had had a series of mainly unskilled jobs before joining the RAF to do his National Service.  At 20, he was working as an unskilled labourer.

My Dad was paid more than twice the amount my Mum earned.

Back, then it was normal.  Women were paid much less than men and everyone was used to it.  In the 1970’s the feminist movement won their campaign for Equal Pay.  My Mum got a handsome raise and a lump sum for the back-dated increase.  (By this time my Dad had his own business).

For many people the story seemed to end there.  Women now had equal pay and equal opportunities.  Now can we all please get back to work?

Well, yes.  But over the ensuing decades that work has included concerted effort to stamp out any acknowledgement of differences between men and women.  It’s illegal to advertise for a specific gender of person to fill a particular vacancy except in some very exceptional circumstances.  It’s frowned upon to relate any characteristics of a person’s behaviour to their gender.  It’s ridiculous to think that someone might be unsuited to a job because of their gender.

Men and women are different.  Aren’t they?

They bring different qualities to their work.  Don’t they?

I have at least one shelf full of books on this subject.  Here are some of the highlights of my learning:

From Deborah Tannen author of ‘You Just Don’t Understand’, ‘That’s Not What I Meant’ and ‘You’re the Only One I Can Tell’ the insight that has stayed with me is about the underlying drivers of communication for men and women.

Warning:  this section contains sweeping generalisations and shameless stereotypes.  I’ll get more specific as we go on…

Men’s communication is driven by the desire to discover and/or negotiate STATUS.  Sometimes this is their own personal status – relative to others.  This is why the job title on business cards can be so important to some men.  In the early stages of a meeting, the exchange of business cards is part of the ritual that establishes the ‘pecking order’.  Once everyone knows who is ‘top dog’ the meeting can progress smoothly – unless someone challenges the hierarchy by stepping out of their role.

Under pressure, men find it hard to admit to experiencing difficulties because this creates a perceived loss of status.  They will also play down the severity of their friends’ problems in order to maintain their friends’ status.  And the reverse is true!

In social situations, men (when unfettered by the presence of women) will chat about sport, gadgets, cars and so on.  This is driven by the desire to establish status on a less personal level.  They debate the relative merits of one team over another, the advantages of the latest smart phone or the speed and acceleration prowess of their favourite cars.  A woman listening in might comment, ‘they don’t really talk about anything’ because she doesn’t share the drive to establish status.

Women’s communication is motivated by the desire to create CONNECTION with others.

In the initial stages of a business meeting women are more likely to ask questions of their colleagues that enable them to find some common ground.  Do we know the same people? Have we worked in the same office at some point?  Did you travel by train today?  Having made the connection, they can participate confidently in the meeting.

Women can empathise with colleagues who are facing difficulties and will be happy to talk about their own challenges if offered a sympathetic ear.  They find it frustrating when their male colleagues won’t talk about problems openly.

A group of women talking together on a social occasion will discuss experiences.  Where they went on holiday, what they did, what they enjoyed.  Others will contribute similar experiences and encourage each other to share personal details.  The conversation will loop around, sometimes returning to earlier topics or repeating previous comments.  A man listening in might comment, ‘they don’t really talk about anything’ because he doesn’t share the drive to create connection.

The next influence on my thinking is the brilliantly titled, ‘Why Men Don’t Listen and Women Can’t Read Maps’ by Alan and Barbara Pease.  In their lively digest of huge swathes of research, punctuated by anecdotes of everyday manifestations of the gender differences in question, I found the antidote to the generalisations that worry modern thinkers:

Which is fundamentally why men don’t listen and women can’t read maps.  But most of us would hesitate to even mention these well-known foibles in polite company.

(Yes, I know men CAN listen and DO listen at times.  I am a woman and I can read maps – but I have to work at it.  I’m not saying these things are universally true, just that they are based in reality)

I could digress here into the extensive work of John Gray of ‘Men are from Mars, Women are from Venus’ fame, but I’ll leave you to read that at your leisure and move swiftly along to the work of Margaret Hennig and Anne Jardine.

Writing in the 1960s and 70s these two pioneers of research into women’s roles in business compared the attitudes of men and women to the idea of a job and career, to risk and to overall behaviour at work.  What they found was fascinating:

For women, a career is an intensely personal goal.  It represents personal growth and self-satisfaction.  In involves contribution to others and is unrelated to the ‘job’.

For men, a career is a series of steps.  It represents advancement, a path leading upwards, recognition and reward.  A job is part of a career.

For men, risk is ‘Win-Lose’ situation.  The possibilities include both loss and gain, danger and opportunity.  It affects the future but is not usually related to the present.

For women, risk is a negative.  It represents loss, danger, injury, hurt, ruin.  It is seen as a threat and is to be avoided.  It affects the here and now, threatening what she has now and the future is disregarded.

For women, their behaviour at work is determined by their own self-concept.  There is an attitude of ‘I am who I am, take it or leave it’.  Consequently they are not alert to the signals and cues from their boss and are more vulnerable to criticism.  For women, work is for real.  They want to do business with people with whom they feel friendship but often have less self-belief than men.

For men, their behaviour at work is determined by others’ expectations.  They are alert to signals and cues from the boss and will adapt their style for self-interest.  To men, work is a game.  They find out the rules and play them.  They are thus more resilient to criticism. Friendship is an outcome of doing business, not a condition.

Overall, we can see that women put more of themselves into their work, whereas men are more likely to retain a degree of detachment.

When it comes to leadership development, most of the traditional models are based on the male approach because the tradition reaches back to times when most leaders were men.

However, times have changed.  The increase in the number of women in leadership roles has undoubtedly had an impact.  We can see the rise of typically feminine strengths being valued in leaders:

Did anyone care about ‘authentic leadership’ when organisations were run by men?  Was it important to create connection or just to reinforce status and make sure everyone kept to their place?

We have to go back some decades to find those times – back to when my Mum got paid less than half my Dad’s wages even though she had way more qualifications.

So the world has moved on.  It has taken time.  The first women in leadership roles were faced with the choice of either conforming to the traditional male models of how to do business or running the risk of being ignored and despised.  (And we know about the female attitude to risk!) Their lack of ability in the power games and jostling for status that characterised the traditional male cultures made it hard for men to know where they ‘fitted’ so they either ignored them or slotted them in at the bottom of the pecking order.  Women who tried to create connections with male colleagues were regarded as ‘nosy’ or flirtatious.  Men who welcomed a more heart-felt approach to business were ridiculed and side-lined.  For a while.

Gradually, the two models began to intersect and to work together.  Gradually the best of each was allowed to flourish.  Gradually we created business cultures where men and women can work side-by-side and can take advantage of similar opportunities.  (No, it’s not perfect, but it’s real progress)

And now, the new generation of ‘millennials’ is bringing a different attitude to work.  One, I think that owes less to the traditional masculine models and more to the blend of both male and female models.

Members of this new generation have their own agenda.  They won’t work to rules they don’t agree with and their primary loyalty is to their own well-being.  They don’t respect job titles, but they do respect you if you are good at your job.  They want job satisfaction now, not in twenty years’ time when they’re too exhausted to enjoy it.  They want quality of life, across all areas of life, not just outside of work.

I really believe that organisations who ignore gender differences completely are missing a trick and that if it were acceptable to talk about these matters we would see greatly improved leadership in many places.  Authentic leadership, that is!