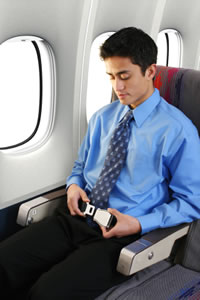 In the past few weeks I’ve had several conversations with Senior Managers and Directors in different businesses, grumbling about the cuts to their companies’ travel budgets.

It’s no secret that most large organisations spend a huge amount of money getting their Executives from one site to another and when belts are being tightened the travel budget is an obvious target.

One approach is to stop people travelling and encourage the use of video-conferencing and other technology instead.

Another option is to reduce the class of service used.

One Executive told me, “Our company policy now states that unless a flight is more than 8 hours, we travel Economy class. It’s not a good experience.”

I can already hear the chorus of disapproval about over-indulged Executives flying around the world in Business or First Class, lapping up free champagne, watching movies and being pampered by glamorous flight attendants.

Well, the reality of business travel is not often as glamorous as people think, is it? Apart from the usual hassle of check-in and security, often there’s work to be done en route, meetings to attend straight from the airport, a backlog of email and voicemail once you’ve landed AND the continual pressure of providing leadership in the business from wherever you happen to be today.

I can’t help thinking that putting Senior Executives in economy travel is a false economy. These are rarely people so youthful that a missed night’s sleep isn’t an issue. They’re often people who carry massive responsibility and influence. They’re not people who you want to be grumpy when there’s work to do.

With that in mind, let’s reconsider the reason that Executive is travelling:

To provide leadership or technical expertise to people who work for the organisation in another country?  To negotiate with important customers or suppliers? To solve problems or to break new ground?

And what signal is it giving to those employees, suppliers or customers when you send them someone who isn’t important enough to travel in Business Class? What signal does it send to them when a tired, grumpy, stiff and aching Executive arrives?

So now it’s not just the traveller who feels under-valued, it the people they’re visiting as well.

And yes, I know that most experienced business travellers are used to putting on a professional face and doing a great job even if they’re horribly jet-lagged, worried about something going on back at base or waiting for their luggage to turn up.

It’s just, how long would you keep doing that if you thought the company didn’t care about you?

A lot of people say that emotions have no place in business. And yet if you talk to the leaders of most companies, they will say…