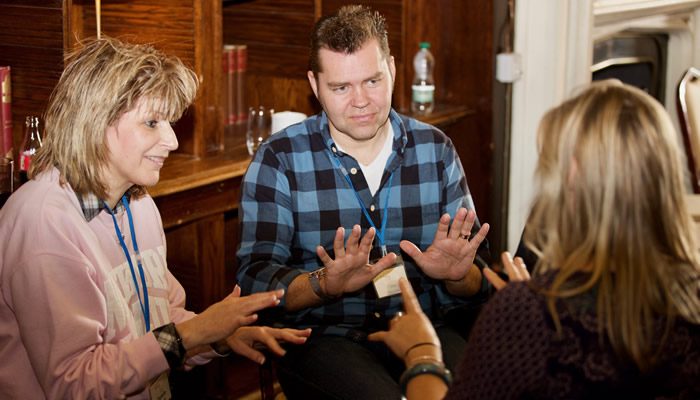 I first published this article in 2010 but the subject came up on the recent NLP Practitioner programme and I thought you might find this interesting.  I’ve only edited it slightly…

If you’ve done any training in communications, public speaking or presentations there’s a good chance that body language has been part of the programme.  For many years, like hundreds, if not thousands, of other trainers I’ve dutifully passed on the wisdom that our communication has three components – words, tone of voice and body language.  Like many others I’ve attributed the work in this field to Albert Mehrabian and quoted the figures of relative importance – body language 55%, tone of voice 38% and words 7%.

That changed when I was on a course with Christina Hall – Meta Master Trainer of NLP and an inspiration to me in her ability with language.  Christina shared her long-standing dissatisfaction with the 55-38-7 ‘rule’ and her eventual quest for the original research.

Are you sitting down?  When Christina gave me the original paper to read the title alone shocked and surprised me:

The study investigated the degree of positive attitude inferred from either facial expression or tone of voice using – wait for it – a neutral word.  There was no investigation of the interaction of the words and nonverbal communication and the 55-38-7 split is suggested in the discussion at the end of the document, not derived from any experimental data.  The experimental data that is included in the paper was taken from trials with 17 female undergraduates.

There is nothing wrong with the paper – it’s the inference that has been made and perpetuated that’s way off the mark.

So how is it that generations of trainers have been quoting these figures as essential to the proper understanding of communication?

I can only assume that this is a great example of people (and lots of them) believing what they’ve been told because the person who told them was a) a trusted source and b) believed it themself.

So, my apologies if you’re one of the people to whom I have perpetuated this myth.  Now, let’s review what we actually know to be true…

Body language is a key component of face-to-face communication.  Some languages rely more heavily on it than others to help convey nuances of meaning.  Native speakers of English tend to be less reliant on body language to convey meaning, because the richness of the language enables us to communicate very precisely.  Native speakers of languages with a less extensive vocabulary are often masterful in expressing themselves through tone, pitch, facial expression and eloquent gestures.

It is true, as well, that if someone says, ‘I’m looking forward to working with you’ and at the same time looks at the clock and doesn’t make eye-contact, most of us will assume that the words were not an expression of what the person was really thinking.  In other words, we will believe the body language rather than the words if the two are giving different messages.  This uses an instinctive understanding of body language that we all possess, but may not be consciously aware of.

In the same way, if someone were to say ‘I’m looking forward to working with you’ in a low monotone, with a slight sigh at the end, you probably wouldn’t believe it for a moment.  Again, if the tone of voice is communicating something different from the words, then we’ll tend to believe the tone of voice.

If the tone of voice and body language are congruent with the words, then the words will be believed.  This is why it’s so important to master the non-verbal aspects of communication as well as learning language patterns.  It’s at this point that what you say can become VERY influential.  Don’t ever let anyone tell you again that the words are ‘only 7% of the message’.  It’s simply not true.

As well as being aware of conflicting messages in words, tone and gesture, we have an instinctive understanding of the meaning of a whole range of body language.  However, that doesn’t mean that we always interpret it correctly.  Individual bits of body language should be interpreted in context, and not assumed to have a fixed meaning.

For example, lots of people have heard it said that if someone folds their arms across their chest, it’s a defensive gesture.  That can be true – especially if you see it happen at a point in the conversation when the person may have good reason to be defensive.  However, there can be lots of reason why someone might fold their arms.  They might be cold; they might be sitting on a chair that has no armrests; they might simply feel comfortable that way.

If you’re going to observe body language, observe the whole picture and look for 3-4 aspects of body language that all indicate the same thing.

So, with Brexit looming in the UK, and political leaders all over the world having reasons to be seen on TV, there’s lots of material for us to study.  If the policy discussions are beginning to bore you, try watching the body language – it’s fascinating!