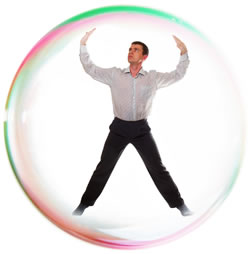 Earlier this year a friend was telling me how unhappy she was in her job. She didn’t like her boss and was feeling trapped. She said “I’ve looked around and there are no other jobs in the area with the same salary. I’ve got a mortgage and two children at school – I need the income. So I have no choice but to put up with it.”

On the surface it did look like she was a bit stuck and that can be a depressing thought. We talked about it and I asked her about other alternatives if she was prepared to make some major changes – however unattractive those options might be. After the conversation she still wasn’t particularly happy about her job but she was feeling much more positive about the future and the choices she was making at the time.

We know from NLP that usually when a person is unhappy their values are being violated or not being fulfilled. The conversation enabled her to notice important values in her life which were being fulfilled because of her choice to stay in the job – for example the area she was living in and her children’s education. It also enabled her to put all of this into the context of a bigger picture – it gave her a more ‘balanced’ perspective. In NLP terms it put her at the ‘cause’ end of the ‘cause – effect’ equation. She also recognised that this was just her choice at that particular moment in time and she became more open to the possibility that the situation could improve.

Recognising that you always have choice, in any situation, and that you are selecting the outcome you most prefer, in that moment, can be really empowering – even if you might wish there were some other options.

I saw my friend again recently and it turned out that her boss has left the company and moved to the Midlands. She gets on very well with her new boss and she is really enjoying her job again. Although she couldn’t have predicted that her boss would leave, just having that different mindset enabled her to feel more in charge of the situation.

With thanks to this week's guest writer, Brilliant Minds Associate Partner, Peter Jefford