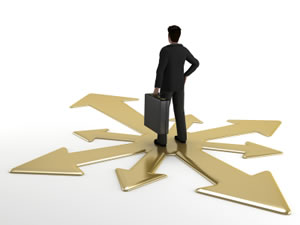 I often get into dialogue with people on the subject of how they can create, understand, modify or evolve their job role. Particularly when people have moved into a new role or their existing role has changed substantially, they can find it quite a challenge to really get to grips with what it is they have to ‘do’ in order to be successful.

Often they ‘sort of wait’, hoping that someone else (i.e. their boss!) will tell them what their role should be in enough detail so that they can then work out what they need to actually ‘go and do’. It suddenly occurred to me that in this process of trying to work it out we can easily forget, or not realise, that we have already been through this process before…creating our own job role I mean. Chances are, we have probably all done it many times already.

Usually when we are trying to do something new, that we haven’t done before, it can seem more difficult to know where to start, how to sort it out…we may lack confidence about it…or even feel daunted. But when we know that we have done it successfully in the past, or at least something like it, then we naturally feel more confident in our approach…because in a way confidence comes from having done something successfully one or more times in the past.

So how do I mean that we have all done it before? Think about it, if two different people were to go into ‘nominally’ the same job role…they would both approach it in very different ways and create the new role around their own personality, style and preferred way of doing things. After a while these two nominally similar jobs could actually look totally different, because they have two different people doing them.

Ipso facto…we all create our own job role every time we take on a new job or changing responsibilities. Mostly we do it fairly ‘unconsciously’, by exploration and experimentation, and it evolves.

Recognising how you have done this before might make you feel a lot more confident if your job has changed and you are having to create the new job role around yourself.

Being more conscious and confident in your exploration and experimentation…will undoubtedly get you there quicker! After all, isn’t that within the essence of NLP?