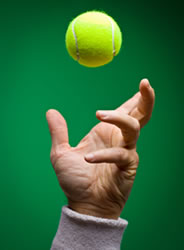 There is a technical question I’m often asked about NLP: ‘What is the difference between associated and dissociated?’ Watching the Men’s Wimbledon Final on Sunday, I saw the perfect demonstration of the difference. (Well, you didn’t  think I could let Andy Murray’s wonderful win pass by without comment, did you?)

‘Associated’ means you’re right in the moment, responding to the changing information you receive from your senses. The largely British crowd at Wimbledon, gasped and groaned, shouted, cheered and sighed at almost every point. That’s associated! Everything that happened affected the responses of the spectators. (And I have to say it was exactly the same where I watched the match – we gasped and groaned along with everyone else!)

‘Dissociated’ means that you’re detached from what’s going on. You may be aware of it, but it’s not affecting your emotions or physical state. Pan the camera to the players’ box where Ivan Lendl sat, inscrutable in deliberate silence. Nothing made him gasp or groan, smile or sigh. He simply sat and watched, completely in control of himself. That’s dissociated.

Of course, we all do both in the course of a day. Each has its place, each has advantages and disadvantages.

So when you’re planning an important event, conversation or communication, how about asking yourself, ‘Will it serve me better to be associated or dissociated?’

The choice is yours.

And if you were watching the Wimbledon final and heard Andy Murray’s interview at the end, you may remember that he said he had no memory of the last game or point. He was concentrating so much that he didn’t remember anything.

Do you think that shows he was associated or dissociated?