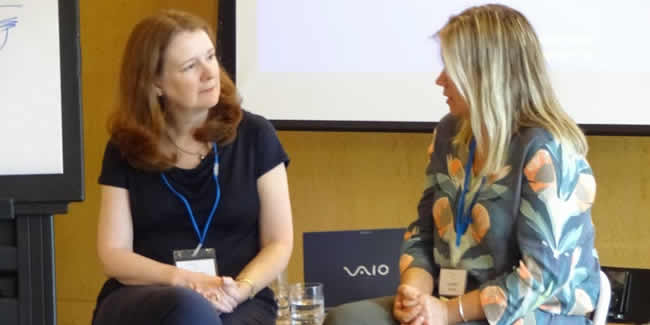 George was a Senior Manager within a manufacturing and distribution business. He had overall responsibility for a site where some 500 people were employed and reported to a Director some 200 miles away. He came to me because his relationship with his boss was difficult and he had been unable to sort it out. We worked through a programme of communications skills, identifying patterns in both George’s communications and his boss’s. George learned some simple strategies for creating professional rapport and for adapting his communication style to facilitate meaningful dialogue with his boss. He was astounded by the results, because the skills he learned were completely transferable and helped him enhance communications in all aspects of his work. (I also helped him to give up smoking)

Margaret was the Compensation and Benefits Manager of a large international company. She was approaching her 50th birthday when we first met and having a crisis of confidence about her perceived value in the business and was worried that her career would be over when she turned 50. She also had 2 teenage sons and a husband who found it hard to handle her frequent business trips that left him in charge of the family home. Her loyalties conflicted and she was beginning to feel very stressed. We worked through a programme that focused on Margaret’s personal values relating to work and to family life. By identifying and resolving conflicts in her values she was able to create a congruent plan for the future and stop worrying. She continued to be a client for a long time after her personal coaching was completed, because the confidential nature of her work meant that she lacked a peer group to bounce ideas off and found that a coach was the ideal person to fill this gap. She eventually moved to another company in the same sector as HR Director and when her new company acquired the old one she became HR Director of the combined Group

Derek was a Senior Manager in IT. He was very successful but found it hard to stay in any job for more than 2 years and seemed always to be working at cross-purposes with the people around him. He was regarded as a maverick, respected but also slightly feared. He came to me because he was curious about how I might help him – he didn’t think he had any major issues. Working with Derek it became clear that he was a habitual mis-matcher – he would disagree for the sake of disagreeing and couldn’t stop himself from doing it. I helped him develop a different strategy so that he could choose when to disagree and when to go along with others. Two months later, he was promoted to the Board. He says that it’s now much easier to get results at work because he has more control over how he reacts to other people. He’s still a maverick and displays some pretty unusual behaviour, but now it works more reliably.

Sally is a Senior Sales Manager. She enjoys her work and has an impressive track record of achievement. She came to me because, in her early thirties she began to be aware of a conflict between her career goals and her personal desire for marriage and family life. This had become such an issue that it was distracting her from work and causing further frustration. We worked through a programme, which focused on Sally’s personal values relating to work and to family life. By identifying and resolving conflicts in her values she was able to create a congruent plan for the future and stop worrying. Within days she was totally focused at work again and enjoying her leisure time much more. Within 3 months she was promoted. (Resolving conflicts in her values also enabled her to deal with a long-standing weight problem) A year later she was also in a relationship with the man who was to become the father of her two daughters.

John is a Senior Manager in a science and research organisation. Assessment had identified him as a potential ‘high-flyer’ but he consistently received feedback that he lacked presence and often failed to make an impact at important meetings. His Director of Learning referred him to me to ‘see if we could do anything’. John had four coaching sessions in which we identified his personal values relating to work, profiled his personality using ‘Thinking Styles’ and then worked through specific behaviours that he could use to become more ‘charismatic’ and memorable in meetings. He realised that semi-formal situations were the most difficult for him and we developed strategies for handling that kind of occasion. Between his final coaching session and the review a month later, the company announced a re-organisation in which Managers at John’s level and the one above would be in competition for a reduced number of jobs. John identified the job he wanted, declined to apply for any others and was appointed to the job of his choice – the highest profile role available.